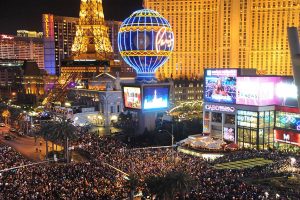 For many Americans, Las Vegas is the IT destination to ring in the New Year. In the city with nicknames like the “City of Lights” and “Glitter Gulch” becomes even more dazzling for New Year’s Eve. At 6 p.m., the world famous Las Vegas Strip will be completely closed to vehicular traffic, thereby creating enough room for an enormous street party with over 300,000 people expected to attend. The highlight of this mega-event is as the clock strikes midnight, when fireworks will be shot simultaneously from the rooftops of seven major Vegas casinos including the MGM Grand Hotel and Casino, Caesars Palace and the Venetian for a breathtaking display of pyrotechnics.

Once named the world’s best city for New Year’s Eve, Las Vegas has plenty of other festivities going on to ring in the New Year. For instance, popular singer-songwriter Bruno Mars will headline the NYE show at the Park Theater at the Monte Carlo Resort and Casino, Maroon 5 will host another major NYE party at the Mandalay Bay Events Center, Elton John will perform his classic hits at the Colosseum at Caesars Palace and Sting will appear at the Chelsea, inside the Cosmopolitan of Las Vegas.

Additionally, in downtown Vegas, there will be a 21 and over street party at the Fremont Street Experience and a host of big name music acts are slated to appear at some of the best Vegas nightclubs, such as Calvin Harris at Omnia Nightclub, Major Lazer at Wynn Las Vegas, Ludacris at the Light Nightclub, the Weeknd at the Marquee and Drake will take the stage at Hakkasan Nightclub’s NYE Celebration.